Cliven Bundy’s lawyer, similar to the appellate lawyers Michigan offers, said Wednesday that he plans to appeal a judge’s decision to throw out a lawsuit in which the Southern Nevada rancher sought to declare all public lands a part of the state.

District Judge Jim Crockett’s decision this week followed previous court decisions against Bundy, who has claimed the federal government should not own land.

Crockett wrote that “it is simply delusional to maintain that all public land” in Nevada should belong to the state.

One of Bundy’s lawyers, Larry Klayman, said he was planning an appeal. He called Crockett’s comment an inappropriate personal attack and a judicial violation.

“It was completely uncalled for, and it shows the judge’s bias and prejudice,” Klayman said.

After he was cleared of federal criminal charges last year and freed from jail after nearly two years, Bundy claimed in a suit against Nevada and Clark County that then-President Barack Obama’s late 2016 establishment of Gold Butte National Monument was illegal, and would preclude him from continuing to function on his land and destroy his livelihood.

In January 2018, U.S. District Judge Gloria Navarro dismissed charges against Bundy, two of his sons and another man in connection with an armed standoff with the Bureau of Land Management.

The April 2014 standoff occurred after federal agents tried to execute a court order to round up Bundy’s cattle following a decadeslong dispute over grazing fees.

U.S. District Judge Gloria Navarro, who granted a mistrial in the case last month, said Monday’s decision was based, in part, on “flagrant prosecutorial misconduct.”

“A universal sense of justice has been violated,” Navarro said.

Bundy stepped out of jail-issued clothing for the first time in nearly two years, donning a cowboy hat, a blue button-down shirt, a gray sport coat, blue jeans and brown boots. He left the federal courthouse in downtown Las Vegas with his arm around his wife, Carol.

“I’ve got my sweetheart beside me. I’m feeling pretty good. But I’m not used to being free. I’ve been a political prisoner for right about 700 days today,” he said. “I come in this court an innocent man, and I’m going to leave an innocent man.”

First Assistant U.S. Attorney Steven Myhre, the lead prosecutor on the case, declined to comment on the decision as he walked out of the courtroom.

Shortly afterward, newly appointed Interim U.S. Attorney Dayle Elieson released this statement: “We respect the court’s ruling and will make a determination about the next appropriate steps.”

As Carol Bundy waited for her husband’s release, she said, “It’s just a good day to have a good day. God blessed America once again.”

The Bundys were met at the entrance of the Lloyd George U.S. Courthouse by a crowd of reporters and cheering supporters.

A federal judge dismissed all charges Monday against Bunkerville rancher Cliven Bundy, two of his sons and another man. 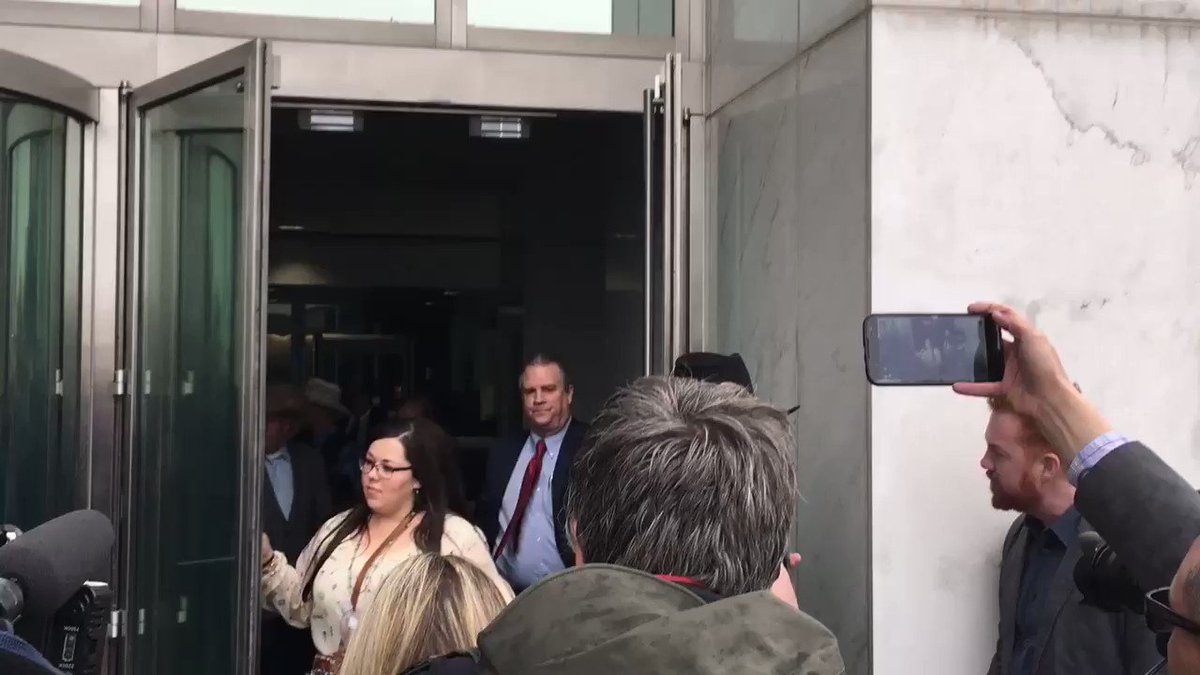 “The Bundy family took up arms against the U.S. government, endangering the lives of the men and women who work tirelessly to protect America’s public lands. Letting the Bundys walk free on a technicality should send a chill down the spines of anyone who values our parks, wildlife refuges, and all public lands.”

Kieran Suckling, executive director of the Center for Biological Diversity, released a statement that accused prosecutors of bungling the case.

“The Bundys rallied a militia to mount an armed insurrection against the government,” the statement said. “The failure of this case will only embolden this violent and racist anti-government movement that wants to take over our public lands.”

Cliven Bundy, his sons Ammon and Ryan, and co-defendant Ryan Payne went to trial in late October on charges that stemmed from a 2014 standoff with federal agents.

“God gave us the advantage, and the truth will set you free,” Ammon Bundy told reporters after Monday’s ruling.

His lawyer, Dan Hill, called the ruling “the clearest-cut, most-unwavering dismissal I’ve ever heard or seen.”

Ryan Bundy said Navarro should dismiss the case against all remaining defendants.

“The government has acted wrongly from the get-go,” he said.

Assistant Federal Public Defender Ryan Norwood, who represents Payne, said: “No one has come out a winner in this whole thing. The prosecution has destroyed people’s lives.”